This page contains changes which are not marked for translation.
Other languages:
English • ‎русский 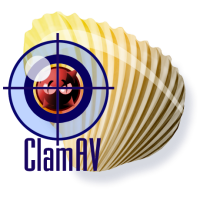 ClamAV is an open-source antivirus engine for detecting trojans, viruses, malware & other malicious threats. One of its main uses is on mail servers as a server-side email virus scanner. The application was developed for Unix and has third party versions available for AIX, BSD, HP-UX, Linux, macOS, OpenVMS, OSF (Tru64) and Solaris. As of version 0.97.5, ClamAV builds and runs on Microsoft Windows. Both ClamAV and its updates are made available free of charge.

Sourcefire, now acquired by Cisco, a maker of intrusion detection products and the owner of Snort, announced on 17 August 2007 that it had acquired the trademarks and copyrights to ClamAV from five key developers.

ClamAV includes a number of utilities: a command-line scanner, automatic database updater and a scalable multi-threaded daemon, running on an anti-virus engine from a shared library.

The ClamAV virus database is updated several times each day and as of 30 October 2011 contained 1,063,024 virus signatures with the daily update Virus DB number at 13867.

ClamAV is currently tested daily in comparative tests against other antivirus products on Shadowserver. In 2011, Shadowserver tested over 25 million samples against ClamAV and numerous other antivirus products. Out of the 25 million samples tested, ClamAV scored 76.60% ranking 12 out of 19, a higher rating than some much more established competitors.

In a Shadowserver six-month test between June and December 2011, ClamAV detected over 75.45% of all viruses tested, putting it in fifth place behind AhnLab, Avira, BitDefender and Avast. AhnLab, the top antivirus, detected 80.28% [1]

ClamAV is available in the extra repository[2]. You can install it by command:

Edit the contents of the configuration files to suit your preferences:

You may get a notification that clamd was not notified. This is normal because we haven't started the service yet.

Schedule scans and updates through cron

Run crontab -e to edit your crontab and add the following line, editing it to your needs:

This scans the entire $HOME directory every week on Saturday at 08:53. See man 5 crontab for more info on the formatting of this file and man clamdscan for an explanation of the options used.

Then run sudo crontab -e -u clamav to set up automatic updates. (These should be run as the clamav user.) Add the following line to update these at 13 past every hour:

ClamTK is a graphical user interface to setup scheduled scans and updates as well as one-off scans. It's available in the community repository[3], you can install it with pacman:

Retrieved from "https://wiki.manjaro.org/index.php?title=ClamAV&oldid=29903"
Categories:
Cookies help us deliver our services. By using our services, you agree to our use of cookies.